The 1920 Stanley Cup Final was contested by the National Hockey League (NHL) champion Ottawa Senators and the Pacific Coast Hockey Association (PCHA) champion Seattle Metropolitans. The Senators won the series by 3 games to 2 in the best-of-five game series. Although all of the games for the series were scheduled to be played at The Arena in Ottawa, unseasonably warm weather and poor ice conditions forced the last two contests to be played on the artificial ice at Toronto's Arena Gardens (also known as the Mutual Street Arena).

The Senators captured the 1919–20 NHL title after they won both halves of the regular season, thus eliminating the need for a league championship playoff. Meanwhile, Seattle finished the 1919–20 PCHA regular season in first place with a 12–10 record, but had to defeat the second place Vancouver Millionaires in a two game total goals championship series, 7–3, to win the PCHA title.

Ottawa won the first two games of the series. After Jack Darragh scored the game-winning goal in their 3–2 victory in game one, goaltender Clint Benedict led the Senators to a 3–0 shutout win in game two. Seattle won game three, 3–1, before the series was shifted to Toronto because of Ottawa's slushy ice conditions (The Ottawa Arena did not have artificial ice). Frank Foyston then scored twice to lead the Mets to a 5–2 victory in game four to even the series. In the fifth game, Darragh recorded a hat-trick to lead the Senators to a 6–1 win to clinch the Cup.

For the series, Frank Nighbor led Ottawa in goals with six, while Darragh scored five. Benedict recorded a 2.20 goals-against average during the series

engraving-notes= The Senators did not engrave their name on the Cup for the 1920 championship. When the trophy was redesigned in 1948 the words "1920 Ottawa Senators" were engraved onto a new collar. 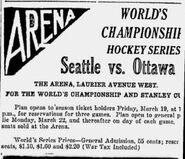