Note: Weyburn withdrew on January 29 after losing 11 games. One game was defaulted to Moose Jaw to even up the record.

Note: This league was suspended by the Canadian Amateur Hockey Association because the Crescents had two players on their roster who should have played on the Winnipeg Falcons.

For that reason the Regina Victorias did not advance in the Allan Cup playoffs. 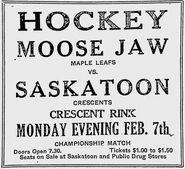 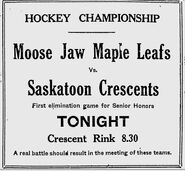