The 1920–21 Montreal Canadiens season was the team's 12th season and fourth as a member of the National Hockey League (NHL). The Canadiens, for the second season in a row, did not qualify for the playoffs, finishing third in the first half and second in the second half of the season.

The team saw some turnover from the previous season's team. Harry Cameron, Billy Coutu, Jack Coughlin, Howard McNamara and Don Smith were gone. In their place was Billy Bell, Dave Campbell, Jack McDonald, Harry Mummery, Dave Ritchie and Cully Wilson. Coutu was traded to the new Hamilton Tigers for Mummery. Cameron returned to Toronto and picked up Wilson. McDonald and Ritchie were picked up as free agents while Campbell was a new professional from the Laval University ranks and would only play in three games.

Georges Vezina came third in the league in goals against average of 4.1 per game. Newsy Lalonde led the Canadiens in offence, scoring 32 goals and 10 assists to win the league scoring championship. 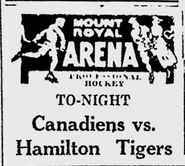