The 1919 Stanley Cup Final ice hockey play-off series to determine the 1919 Stanley Cup champion ended with no champion decided, being suspended after five games had been played due to an outbreak of Spanish Influenza. This was the first and, as of 2009, only time since its donation in 1893 that the Stanley Cup was not awarded after the playoffs began.

Hosting the series in Seattle was the the Pacific Coast Hockey Association (PCHA) champion Seattle Metropolitans (Mets) playing off against the National Hockey League (NHL) champion Montreal Canadiens. Both teams had won two games, lost two, and tied one before health officials were forced to cancel the deciding game of the series. The entire Canadiens team and its manager George Kennedy fell ill with the flu and were hospitalized. The flu would eventually claim the life of Canadiens' defenseman Joe Hall four days later. Kennedy was permanently weakened by his illness, and it led to his death a few years later.

The Canadiens won the first half of the 1918–19 NHL regular season while the Ottawa Senators won the second half, setting up a best-of-seven series between the two clubs to determine the NHL title. Montreal ended up winning the series, 4 games to 1.

Meanwhile, the Metropolitans finished the 1919 PCHA regular season in second place with a 11–9 record, behind the 12–8 Vancouver Millionaires. The two teams then faced off in a two-game total-goals championship series, with Seattle winning game one, 6–1. Vancouver recorded a 4–1 victory in game two, but lost the series to the Metropolitans by a combined score of 7–5.

All of the games were held at the Seattle Ice Arena. As with the previous Stanley Cup Finals, the differing rules for the leagues alternated each game: PCHA rules were used in games one, three and five; and NHL rules were to be used in games two and four. The actual game five used NHL rules, as it was considered a replay of game four.[1]

Seattle dominated Montreal under PCHA rules, scoring two in the first, three in the second and a further two in the third.[2] Corbeau of Montreal was injured but finished the game and continued to play in the series as a substitute.[3]

The Canadiens evened the series in game two with Newsy Lalonde scoring all of Montreal's goals. Montreal took the lead and never relinquished it, although Seattle scored two in the third in 32 seconds to make it close. Joe Hall took a puck in the nose, on a deliberate play by Cully Wilson but the rough tactics did not continue as Seattle tried to catch up.[4]

Back under PCHA rules, the Metropolitans won game three, 7–2. Seattle scored four goals in the first to take a commanding lead. No goals were scored in the second. In the third, Seattle prevented any comeback, outscoring Montreal 3–2.[5]

Game four ended tied, 0–0, after 20 minutes of overtime, with both Holmes and Montreal's Georges Vezina blocking every shot. Near the close of the second overtime, Berlinguette of Montreal had an outstanding chance to win it, but missed by inches. Wilson of Seattle would mix it up with Berlinguette who had to leave the ice. The crowd gave both teams an ovation after the game in appreciation of the teams' play.[6]

Between game four and five, discussions were made about which rules to use for game five. As game four had finished in a tie, the Canadiens wished game five to be a replay of game four, using NHL rules and Seattle wanted PCHA rules. The game was played under NHL rules, and it was agreed that in the future, teams would play overtime until a winning goal was scored.[1] Lalonde scored two goals, and Jack McDonald scored the game winning goal 15:57 into overtime, to lead the Canadiens to a 4–3 victory. Montreal was down 3–0 after two periods, but Seattle had tired and Montreal scored three to tie the game, Lalonde scoring Montreal's second and third goals.[7]

Cancellation: "The Stanley Cup Series Is Off"[]

The sixth and deciding game of the series was scheduled for April 1, but the epidemic of Spanish Influenza caused several players on both teams to become seriously ill. With Lalonde, Hall, Couture, Berlinguette and McDonald of Montreal hospitalized or sick in bed, with fevers between 101 to 105 degrees Fahrenheit, game six was canceled just 5.5 hours before it was scheduled to start.[3] Kennedy said he was forfeiting the Cup to Seattle, but Pete Muldoon, manager-coach of the Metropolitans, refused to accept the Cup in a forfeiture, seeing that it was catastrophic illness that had caused the Canadiens lineup to be short of players. Kennedy asked to use players from the Victoria team of the PCHA and president Frank Patrick refused the request.[8]

Five days later, Joe Hall died of pneumonia brought about by the flu.[9] His funeral was held in Vancouver on April 8, with most team members attending,[10] and he was buried in Brandon, Manitoba.[9] Manager George Kennedy also was stricken. His condition declined and his wife arrived from Montreal to be with him.[11] He seemed to recover and was released from the hospital, but he never fully recovered and he died a few years later.

No official Stanley Cup winner was declared in 1919, and thus nothing was engraved onto the trophy. However, when the Cup was redesigned in 1948 and a new collar was added to include those teams that did not engrave their names on the trophy themselves, the following was added: 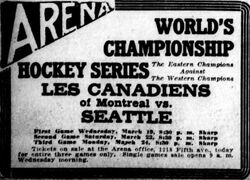 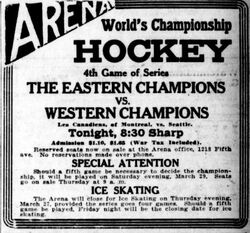 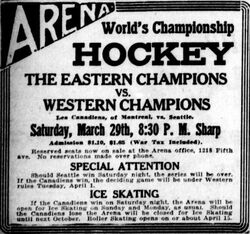 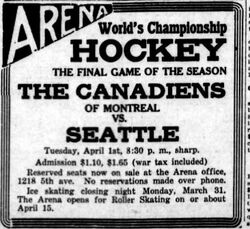