Three teams played off for the right to advance to the Allan Cup final. British Columbia's champion could not advance because its playoff was held too late. Saskatchewan's senior league also was too late.

Note: The Alberta Big Four League was not eligible for the Allan Cup beacause it used reinstated professionals. Saskatchewan's senior league's playoffs finished too late for its champion to advance to the official playoffs. Champions of the two leagues met in an unofficial series. 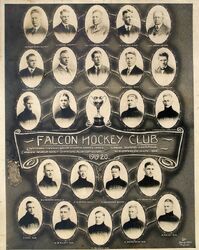 Winnipeg Falcons
Add a photo to this gallery

Ad for the Winnipeg games.
Add a photo to this gallery
Retrieved from "https://icehockey.fandom.com/wiki/1919-20_Western_Canada_Allan_Cup_Playoffs?oldid=444884"
Community content is available under CC-BY-SA unless otherwise noted.