Ice Hockey Wiki
Register
Don't have an account?
Sign In
Advertisement
in: National Hockey League seasons, 1919 in hockey, 1920 in hockey

The 1919-20 NHL season was the third season of the National Hockey League. Four teams each played 24 games. The NHL's Ottawa Senators won the Stanley Cup by defeating the PCHA's Seattle Metropolitans three games to two in a best-of-five series.

A group was found to buy the dormant Toronto franchise a day before the regular season was slated to begin, and they named the club the Toronto St. Patricks. The group paid $5,000 to the NHL for the franchise.

The Quebec Athletic Club, which did not ice teams in the first two seasons of the NHL due to financial concerns, finally iced a team, although they were not successful.

The Montreal Canadiens had their home opener January 10 in brand new Mount Royal Arena and Newsy Lalonde used the occasion to celebrate with six goals in a 14-7 drubbing of the Toronto St. Patricks.

Jack Darragh of Ottawa had a chance to play in goal when Toronto defeated Ottawa 5-3 on January 24th. He took over when Clint Benedict was penalized. He did not surrender any goals during the two minutes.

Despite a dismal record of 2-10 in both halves of the season, the Bulldogs' Joe Malone scored seven goals in one game on January 31, 1920, a mark that still stands today. He nearly equalled the record on March 10 when he scored six goals in a 10-4 win over the Ottawa Senators. He led the league in goals with 39. But by surrendering 7.18 goals against per game, a record that stands today, Quebec finished dead last.

With the war now over, players came home and fans were now coming in larger numbers to see games. On February 21, 1920, a record crowd of 8,500 fans came to see Ottawa play Toronto at the Arena Gardens (also known as Mutual Street Arena).

On March 3, the Montreal Canadiens pummeled the Quebec Bulldogs 16-3, setting an all-time record for goals by one team.

Since the Ottawa Senators won both halves of the split regular season, there was no need for an NHL playoffs and the Senators were given the O'Brien Trophy and were assured a spot in the Stanley Cup Championship series. Representing the Pacific Coast Hockey Association this year was the Seattle Metropolitans, who battled in a very tight PCHA, where two wins separated its three teams. A problem arose as Seattle's green, red, and white uniforms looked almost alike to Ottawa's black, red, and white uniforms. The Senators agreed to play in white sweaters. The previous year saw the championship played out west. This year, it was played in Ottawa, but with unseasonably warm weather, the final two games were played in Toronto's Arena Gardens.

The following is a list of players of note who played their first NHL game in 1919-20 (listed with their first team, asterisk(*) marks debut in playoffs):

The following is a list of players of note that played their last game in the NHL in 1919-20 (listed with their last team): 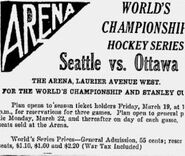 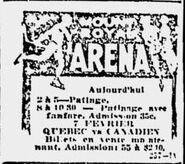