This is the 1919-20 Intermediate Intercollegiate Series. It was the first post-war season. The previous season was 1914-15.  In the meantime, leagues were added in Westerrn Canada (WCIAU) and the Maritimes (MIAA). In the IIS, St. Michael's College was added to the West. Royal Military College rejoined the Central/East and McGill University II left.

McMaster and OAC dropped out. 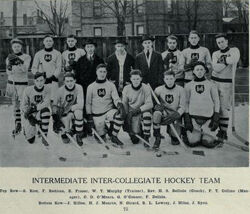 St. Michaels College
Add a photo to this gallery

Retrieved from "https://icehockey.fandom.com/wiki/1919-20_Intermediate_Intercollegiate?oldid=471296"
Community content is available under CC-BY-SA unless otherwise noted.