The 1919–20 Montreal Canadiens season was the team's eleventh season and third as a member of the National Hockey League (NHL). The Canadiens opened their new Mount Royal Arena built to replace burnt-down Jubilee Rink.

The Toronto NHL franchise was now operated by a new group and known as the Toronto St. Patricks. A Quebec team was active this season, meaning a four-team league operated, and players from the Quebec NHA team were 'returned' to the new Quebec Bulldogs NHL team. The Canadiens lost Joe Malone and Jack McDonald to the Bulldogs.

The Mount Royal Arena was not ready for the start of the season, and the Canadiens started their season on the road. The home opener was held January 10, and Newsy Lalonde used the occasion to celebrate with six goals in a 14–7 drubbing of the Toronto St. Patricks.

On March 3, the Montreal Canadiens pummeled the Quebec Bulldogs 16–3, setting an all-time record for goals by one team.

Georges Vezina came third in the league in goals against average of 4.66 per game. Newsy Lalonde led the Canadiens in offence, scoring 37 goals and 9 assists to place second in league scoring to Joe Malone.

The Canadiens picked up their scoring from the previous season, but gave up more goals on defence and failed to make the playoffs for the first time since the 1914–15 season.

There was no playoffs as the Ottawa Senators won both halves of the season.

†Denotes player spent time with another team before joining Montreal. Stats reflect time with the Canadiens only. 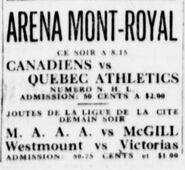 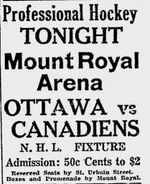