British Columbia's champion could not compete beacuse of time problems.

Alberta had no Amateur Hockey Association set up to sanction Allan Cup competition by the province's teams.

Saskatchewan had no senior teams.

Note: Columbus Club forfeited the second game and then strengthened with some players from the Port Arthur Pascos. Selkirk agreed to this in order to have a more competitive game and attract some fans.

This was an unofficial competition between representatives (not necessarily champions) of the other three provinces who could not compete in the Allan Cup playoffs. 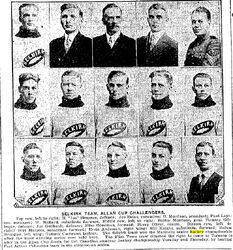 Selkirk
Add a photo to this gallery

Final @ Winnipeg
Add a photo to this gallery

Retrieved from "https://icehockey.fandom.com/wiki/1918-19_Western_Canada_Allan_Cup_Playoffs?oldid=439073"
Community content is available under CC-BY-SA unless otherwise noted.