This group was not organized until February.

Originally it was made up of four teams - Quakers, Pilgrims, Normal School, and the University of Saskatchewan. The Normal School withdrew before the season started. The Quakers dropped out after two games in order to play in the unofficial Western Canada championships.

The Pilgimas and University had split their games so a final was necessary.

Note: There was no senior competition in the province this season. 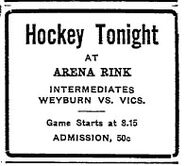 Provincial Final @ Regina
Add a photo to this gallery

Retrieved from "https://icehockey.fandom.com/wiki/1918-19_Saskatchewan_Intermediate_Playoffs?oldid=618679"
Community content is available under CC-BY-SA unless otherwise noted.