The 1918-19 NHL season was the second season of the National Hockey League. Three teams played 18 games each. Only three teams started the 1918-19, the fewest in NHL history. A major rule change was adopted at the beginning of the season allowing forward passing. The NHL the also implemented the blue line for the first time, a rule that was first introduced in the PCHA. The Stanley Cup was not awarded in 1919 due to the worldwide pandemic of Spanish Influenza.

When Toronto won the Cup in 1917-18, a monkey wrench had been thrown into the other owners' scheme to get rid of Eddie Livingstone. His team was estimated now to be worth $20,000, and Livingstone demanded that. The Mutual Street Arena offered $7,000, but Livingstone sued the Arena and Charlie Querrie for the $20,000. A league meeting of the old NHA proved futile as heated arguments broke out between Livingstone and the other owners. The old NHA was extinguished. However, George Kennedy gave some ground, saying that if Livingstone dropped his lawsuits, he might be allowed in the league.

In the meantime, Hubert Vearncombe, treasurer of the Toronto Arena Company formed the separate Toronto Arena HC. This separated the hockey club from the Livingstone lawsuits, though the franchise still used Livingstone's players without permission.

Percy Quinn tried to purchase the Quebec Bulldogs, putting down a $600 down payment. When Calder issued a November 11th deadline for Quinn to declare his intentions, Quinn could not meet it and the Quebec franchise was suspended for the season.

It had been anticipated that the end of World War I would release many veterans to join their old clubs, but very few were demobilized in time to do so. The regular season proceeded with three teams and a twenty-game split-season schedule. However, the second half of the season was cut short to eight games when the Arenas, playing poorly and with issues about breaking training, announced after 7 games of the second half, it could not continue. Calder persuaded Vearncombe to play the 18th game and then the NHL season ended at 18 games. The Arena HC withdrew from the league on February 20, 1919 following financial difficulties.

Left with only two teams, the league had its first ever best-of-seven series to determine who would meet the Pacific Coast Hockey Association champions for the Stanley Cup.

The first hockey death from the influenza pandemic was Ottawa's Hamby Shore in October, 1918.

With the NHL reduced to two teams eighteen games into its 20-game season, a decision was made to have the two remaining teams -- coincidentally the two teams leading each half of the season -- compete in a best-of-seven series to see which team would head west to battle against the Pacific Coast Hockey Association champions. With Ottawa star Frank Nighbor missing most of the series due to a family bereavement Montreal won the series four games to one and faced the Seattle Metropolitans for the Cup.

With the series tied after five games (with one tie), the sixth game was slated for April 1, 1919, when the Spanish Flu epidemic forced the cancellation of the series. Several players on both sides were sick because of it, and it would eventually claim the life of Canadiens' forward Joe Hall five days later. Canadiens manager George Kennedy would not recover completely. This was the only time in history when the Stanley Cup was not awarded after the playoffs began.

The Ottawa Senators went to the Pacific Coast and played an exhibition game against the Victoria Aristocrats and a best-of-three series against the Vancouver Millionaires.

The following is a list of players of note who played their first NHL game in 1918-19 (listed with their first team, asterisk(*) marks debut in playoffs):

The following is a list of players of note that played their last game in the NHL in 1918-19 (listed with their last team): 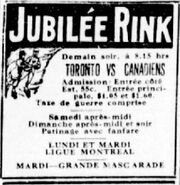 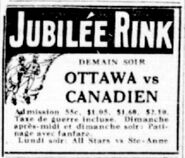