This is the 1918-19 season of the Montreal Hockey League:

Since they won both halves of the schedule, Montreal St Annes won the league title. They also inherited the Art Ross Cup from the defending champion Hochelaga.

Games were played as evening doubleheaders at the Jubilee Arena. The January 23rd doubleheader included one game from the first half and one from the second half.

Montreal St Annes
Add a photo to this gallery 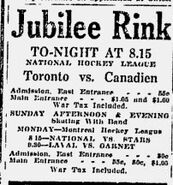 Retrieved from "https://icehockey.fandom.com/wiki/1918-19_MtlHL?oldid=608682"
Community content is available under CC-BY-SA unless otherwise noted.