The 1917–18 Montreal Canadiens season was the team's ninth season and first as a member of the new National Hockey League (NHL). The Canadiens sided with other members of the National Hockey Association (NHA) and voted to suspend the NHA and start the NHL to expel the Toronto Blueshirts ownership. The Canadiens qualified for the playoffs by winning the first half of the season, but lost the playoff to the temporary Toronto franchise, made up of Blueshirts players.

The club changed its name to "Club de Hockey Canadien Ltd." from "Club Athletic Canadien". The logo on the jersey was changed to reflect this, substituting the "A" within the "C" with an "H".

The team was forced to return to its former arena the Jubilee Rink after the Montreal Arena burned down on January 2, 1918. The rival Montreal Wanderers folded after the fire, leaving only three teams (Montreal, Ottawa and Toronto) to continue the season. The Wanderers' players were dispersed and the Canadiens picked up Billy Bell and Jack McDonald.

On January 28, 1918, when Canadiens visited Toronto, Toronto's Alf Skinner and Montreal's Joe Hall got into a stick-swinging duel. Both players received match penalties, $15 fines and were arrested by the Toronto Police for disorderly conduct, for which they received suspended sentences.

Note: GP = Games Played, W = Wins, L = Losses, T = Ties, Pts = Points, GF = Goals For, GA = Goals Against
Teams that qualified for the playoffs are highlighted in bold.
The Wanderers defaulted scheduled games against the Canadiens (Jan. 2, 1918) and Toronto (Jan. 5, 1918), when their arena burned down. These appear as losses in the standings, but the games were not played.

The Canadiens played the Toronto Arenas in a playoff to decided the league championship. In a two-game, total-goals series, Toronto won the first game 7–3 and Montreal won the second game 4–3. Toronto won the series 10–7 and proceeded to the Stanley Cup playoffs.

†Denotes player spent time with another team before joining Montreal. Stats reflect time with the Canadiens only. 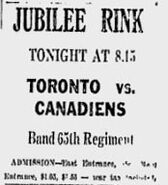 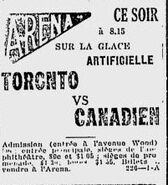 Montreal Arena
Add a photo to this gallery

Retrieved from "https://icehockey.fandom.com/wiki/1917–18_Montreal_Canadiens_season?oldid=688319"
Community content is available under CC-BY-SA unless otherwise noted.