The 1916 Stanley Cup Final was played between the National Hockey Association (NHA) champion Montreal Canadiens and the Pacific Coast Hockey Association (PCHA) champion Portland Rosebuds This was the first time that a best-of-five Cup championship went the distance. Also, the Rosebuds were the first team based in the United States to play for the Cup. The Canadiens defeated the Rosebuds three games to two in the best-of-five game series.

The games of the series were played at Montreal's Montreal Arena as it was the turn of the NHA champions to host the series. This was not the home rink of the Canadiens, but it was larger than their home Jubilee Rink. Games one, three and five were played under NHA rules; Games two and four were played under PCHA rules. Ernie Johnson's share of series revenues was by court order to be paid to the Montreal Wanderers, who he had left while under contract to go to the PCHA. For the entire series, future Hockey Hall of Fame goaltender Georges Vézina aided Montreal by posting a 2.60 goals-against average. Didier Pitre led the Canadiens in scoring with 4 goals.

Portland arrived by train the day before the game but showed no weariness, recording a shutout.

Despite missing Newsy Lalonde and Jack Laviolette, Montreal behind some heavy checking defeated Portland 2–1 to tie the series.

Lalonde and Laviolette played in game three. Lalonde got into a fight with Ernie Johnson, requiring the police to break up the fight. Lalonde and Laviolette were ejected for the game and Eddie Oatman received a major penalty. Pitre was the scoring star, scoring three goals to lead the Canadiens to a 6–3 victory.

The Rosebuds then evened the series with a 6–5 victory in game four. The Rosebuds took a 3–0 lead, only to see the Canadiens tie it and take a 4–3 lead. In the third period Portland's Fred Harris scored twice and Charlie Uksilla scored once to take a 6–4 lead until the last minute when Lalonde scored to make it closer.

In game five, Portland's Tommy Dunderdale gave his team a 1–0 lead before Skene Ronan tied the game. The seldom-used Goldie Prodger then scored the game and series-winning goal to clinch the Cup for the Canadiens.

engraving-notes= Even though they officially did not win the Cup during this season, the Rosebuds had the words "Portland Ore./PCHA Champions/1915–16" engraved on the Cup after obtaining the trophy from the previous year's champions, the Vancouver Millionaires. This was similar to the practice prior to 1915 when the trophy was officially passed on to the winner of the league championship of the previous Cup champion's league.

After the finals, "Canadian/NHA & World's Champions/Defeated Portland/1915–16" was added to the Cup (Note that the anglicized, singular form of "Canadiens" was engraved). 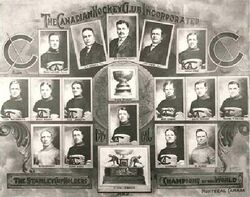 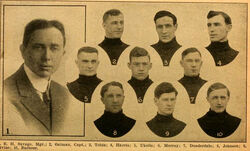 Portland Rosebuds
Add a photo to this gallery 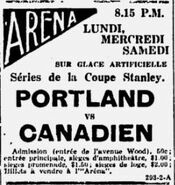 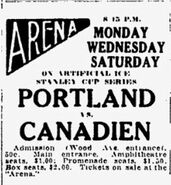 Retrieved from "https://icehockey.fandom.com/wiki/1916_Stanley_Cup_Finals?oldid=413663"
Community content is available under CC-BY-SA unless otherwise noted.