This is the 1916-17 season of the Vancouver City Senior League:

Note: University of British Columbia lost 4-3 to the Centrals and dropped out. The Vancouver 231st Battalion took their place and assumed this loss.

Note: 235th Battalion Kootenay Rangers lost 4-2 to the Towers and dropped out. The Vancouver Firemen took their place and assumed the loss, 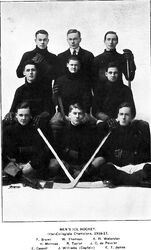 University of British Columbia
Add a photo to this gallery

Retrieved from "https://icehockey.fandom.com/wiki/1916-17_VCSL_Season?oldid=603679"
Community content is available under CC-BY-SA unless otherwise noted.