The 1916–17 NHA season was the 8th and final season of the National Hockey Association. Teams were to play two half-seasons of 10 games each, though this was disrupted.

The NHA franchise of the dormant Shamrocks was taken back from its owner Eddie Livingstone and used by the Toronto 228th Battalion, which had a number of NHA hockey players who had enlisted for military service. Also known as the Northern Fusiliers, the team played wearing khaki military uniforms and was the league's most popular and highest scoring club until the regiment was ordered overseas in February 1917 and the team was forced to withdraw. A scandal ensued when several stars were subsequently discharged, not having to fight and alleged they had been promised commissions solely to play hockey. The NHA would sue the 228th Battalion club for its withdrawal, though ultimately did not succeed.

The Ottawa club wanted to suspend play for the season due to the war, but was voted down.

A split-schedule of two halves would be used.

The single-referee system would be reinstated.

Throwing the stick to prevent a goal would mean the award of an automatic goal for the other team.

On February 10, 1917, the Blueshirts played their final game, losing 4–1 at home to Ottawa. The following day, a meeting of the NHA executive in Montreal was held to deal with the 228th Battalion leaving for overseas. Toronto proposed continuing with a five-team league, but the other owners instead voted to suspend Toronto's team. The players were dispersed by a drawing of names. The following day, President Robinson was quoted as stating that the players would return to the club after the season, but he would not guarantee that the club would be allowed to return to play, stating that would be decided at the NHA annual meeting.

Ottawa, while not unhappy at the suspension of Toronto, nevertheless lost a game for the use of Cy Denneny in a game against the 228th, and saw the Wanderers and Quebec receive wins for games against the 228th. The club threatened to not play for the rest of the season. However, cooler heads prevailed and Ottawa went back to work.

The following weekend, Harry Meeking and Eddie Oatman arrived in Montreal, after being discharged by the 228th after arriving in Saint John, New Brunswick. Oatman charged that the 228th owed him $700 for his commission for his play with the 228th. As Oatman had gotten out of being drafted into the PCHA by being a member of the 228th, this set the Ottawa on again to reverse the game decision, claiming that Oatman was ineligible.

After the 228th Battalion dropped out, and Toronto suspended, the schedule was revised so that the remaining teams would play a 20 game schedule of two halves containing 10 games each. Some of the games to that point were moved into the second half. The 'second half' therefore included some games that the 228th and Toronto played.

The Montreal Canadiens won the O'Brien Cup, but lost to the Seattle Metropolitans of the PCHA in the Stanley Cup Finals. 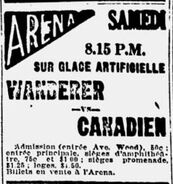 Final @ Ottawa
Add a photo to this gallery

Retrieved from "https://icehockey.fandom.com/wiki/1916-17_NHA_season?oldid=411465"
Community content is available under CC-BY-SA unless otherwise noted.