Ice Hockey Wiki
Register
Don't have an account?
Sign In
Advertisement
in: Montreal Canadiens seasons, 1916 in hockey, 1917 in hockey

The 1916–17 Montreal Canadiens season was the team's eighth season and eighth and last season of the National Hockey Association (NHA). The Canadiens entered the season as league and Stanley Cup champions. The Canadiens qualified for the playoffs by winning the first half of the season. The Canadiens then won the league playoff to win their second league championship, but lost in the Stanley Cup final series to Seattle.

Harold McNamara, who had played for Cobalt in the Canadiens' first game in 1910, joined the Canadiens for this season. He would be released after the first two games and he would retire afterwards.

Note: W = Wins, L = Losses, T = Ties, GF= Goals For, GA = Goals Against
After the 228th Battalion dropped out, and Toronto suspended, the schedule was revised so that the remaining teams would play a 20 game schedule of two halves
containing 10 games each. Some of the games to that point were moved into the second half. The 'second half' standings therefore include some games that the
228th and Toronto played.

Main article: 1917 Stanley Cup Finals
The games of the Cup finals were played at the Seattle Ice Arena. Games 1 and 3 were played under PCHA rules; Games 2 and 4 were played under NHA rules. In game one, Didier Pitre scored 4 goals as he led the Canadiens to an 8–4 victory. But the Mets won the next three contests to clinch the Cup, allowing only one goal in each game. 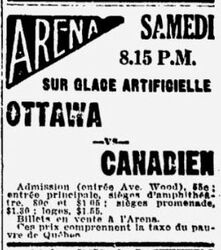