The 1915 Stanley Cup Final was played from 1915-03-22 to 1915-03-26. The Pacific Coast Hockey Association (PCHA) champion Vancouver Millionaires swept the National Hockey Association (NHA) champion Ottawa Senators 3 games to 0 in a best-of-five game series. The finals were played in Vancouver, with Games 1, 3, and 5 played under PCHA rules. The Millionaires became the first team from the PCHA to win the Cup.

This was the first Stanley Cup championship finals played under the then-new agreement by the Cup's trustees, the NHA and the PCHA in which the two leagues' respective champions would face each other for the Cup at the end of the season. The Cup trustees accepted the 1915 NHA-PCHA proposal because they became dependent on the professional game; the top amateur teams were now playing for the Allan Cup. Under the new agreement, the Stanley Cup championship finals alternated between the east and the west each year, while the differing rules of the NHA and PCHA alternated each game.

Vancouver finished the 1914–15 PCHA regular season in first place, and thus winning that league's title, with a record of 13–4. Meanwhile, Ottawa and the Montreal Wanderers both finished the 1914–15 NHA regular season tied for first place with identical 14–6 records, and thus had to play a two game total goals series to determine the NHA champion. In this playoff, the Senators recorded two shutouts to advance to the finals.

All games of the championship finals were played at Vancouver's Denman Arena, the home of the PCHA champion Millionaires. Vancouver ended up sweeping the series with victories of 6–2, 8–3, and 12–3, scoring 26 total goals while limiting the Senators to just eight overall. Cyclone Taylor led the Millionaires with 6 goals. Future Hockey Hall of Famer Barney Stanley scored 5 goals, including 3 in the second period of game three.

‡ Played Rover a position between both Defences and behind the Centre.

The Senators had the words "Ottawa/NHA Champions/1914–15" engraved on the base of the trophy's original bowl even though they did not win the Cup finals. This was similar to the practice prior to the NHA-PCHA agreement when the trophy was officially passed on to the winner of the league championship of the previous Cup champion's league. The previous Cup winner was the 1913–14 NHA champion Toronto Blueshirts.

After the finals, "Vancouver B.C./1914–15/Defeated Ottawa/3 Straight Games" was added to the Cup. Eight players' names and the manager's name were also engraved inside the bowl along the fluted sides.

Two players were left off the Stanley Cup, even though there was room. Kenny Mallen played 14 of 16 regular season games, and two of three games in the finals. Mallen's name was left off by mistake. John Metz was left off, because he only played one game. 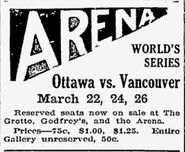 Vancouver
Add a photo to this gallery

Retrieved from "https://icehockey.fandom.com/wiki/1915_Stanley_Cup_Finals?oldid=329858"
Community content is available under CC-BY-SA unless otherwise noted.