This is the 1915-16 season of the Ontario Hockey Association's Senior series:

Preston and Stratford both withdrew.

Toronto Riversides chose not to advance to the 1915-16 Allan Cup. Some players could not get time off from their jobs. 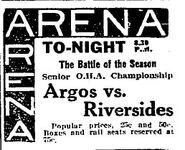 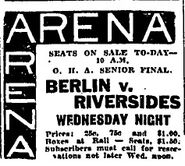 Retrieved from "https://icehockey.fandom.com/wiki/1915-16_OHA_Senior_Season?oldid=463984"
Community content is available under CC-BY-SA unless otherwise noted.