The 1915–16 NHA season was the 7th season of the National Hockey Association. Five teams would play a 24 game schedule. Montreal Canadiens would win the league championship and defeat the Portland Rosebuds to win their first ever Stanley Cup.

Toronto Blueshirts included the players from the Toronto Shamrocks/Ontarios/Tecumsehs franchise. Before the season, Ed Livingstone, the Shamrocks owner, purchased the Blueshirts franchise from Frank Robinson. At the annual meeting of November 9, 1915, he was ordered to sell the Shamrocks franchise but could not do so as the Pacific Coast Hockey Association 'raided' the franchise and signed its players.

President Quinn instituted a rule that officials would be locked in their dressing rooms between periods to disallow influence from the press or players.

Several players from the PCHA signed with NHA clubs:

On January 23, 1916, Skene Ronan was arrested by Toronto police and charged with assault for hitting Alf Skinner.

On February 23, 1916, Gordon Roberts of the Wanderers drew a match penalty for cutting Ottawa's Frank Nighbor in a game in Montreal. On the next visit of the Wanderers to Ottawa, Roberts was pelted with bottles from the Ottawa fans.

The race for the scoring championship was close between Newsy Lalonde of the Canadiens, Joe Malone of Quebec and Cy Denneny of Toronto. Lalonde would finish with 31 goals in 25 games and Malone and Denneny would tie for second with 26 goals. Clint Benedict of Ottawa would have the best G.A.A. of 3.0 to best Georges Vezina's 3.2 goals per game. Gordon Keats of Toronto would score five goals in a game against Quebec on February 7, 1916. He would finish the season with 22 goals in 24 games.

Montreal is the champion and winner of the O'Brien Cup. 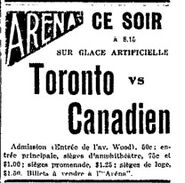 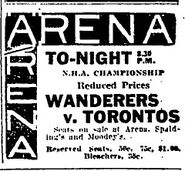 Retrieved from "https://icehockey.fandom.com/wiki/1915-16_NHA_season?oldid=324373"
Community content is available under CC-BY-SA unless otherwise noted.