This is the 1914-15 season of the Ontario Hockey Association's senior series:

Midland dropped out after it lost its first game 7-5 to the Argonauts on January 8. The balance of its five games were defaulted. The team then entered the intermediate series.

The Toronto Victorias were going to Western Canada to play some exhibition games against Winnipeg teams.

From the OHA annual report:

The Victoria Hockey Club of Toronto, Senior champions, played at Melville, Sask., on March 6th, 1915, contrary to O. H. A. instruction, and automatically suspended themselves from the Association. Subsequently the club permanently disbanded, and the President, Mr. F. N. Gooch. reported to the O. H. A. that, so far, he has been unable to secure a proper financial statement, but that proceedings were being taken to secure the same, and any balance recovered will be turned over to the Patriotic Fund. The trouble at Melville occurred over a misunderstanding between the O. H. A. and the Canadian Amateur Hockey Association, as to the application of the three month residence rule. The C. A. H. A. ruled that it did not go into effect until this coming winter, while the O. H. A. held that it applied to last year's teams. The question of jurisdiction was also raised by the C. A. H. A. officials, and befogged the direct issue which was solely regarding the eligibility of certain Melville players under the residence rule. The Victorias showed a singular lack of loyalty to their own Association, especially the officials in charge of the club, and in consequence of their action have put themselves out of the Association. 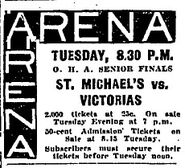 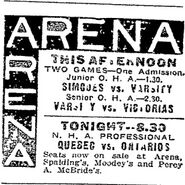