The Ottawa Senators won the NHA championship in a two game, total goal playoff against the Montreal Wanderers. However, they fell to the Vancouver Millionaires of the Pacific Coast Hockey Association in the Stanley Cup championship. It was the first year of an agreement between the NHA and the PCHA to have each league's champion play for the cup.

Prior to the season Art Ross was suspended for trying to organize a rival league, with higher players's salaries. The organizing attempt was not successful, and by January 7, Mr. Ross was reinstated. He signed with Ottawa.

The Ontarios changed their team name to Shamrocks from the February 3 game forward.

Ottawa traded Percy LeSueur to the Ontarios for Fred Lake.

A record long overtime game was played in Quebec on January 13 between Quebec and the Canadiens. Quebec defeated Montreal 3–2 after 50 minutes and 28 seconds of overtime, on a goal by Jack McDonald. Coach Jack Laviolette had to take over for Georges Vezina after Vezina was penalized.

The Ontarios had to forfeit their February 3 game with the Wanderers after the McNamara brothers took a personal leave to attend their fathers' funeral. Owner Eddie Livingstone of the Ontarios asked for a postponement but the Wanderers refused.

A game on February 17 between Toronto and Ottawa turned into a brawl before Toronto police arrested Art Ross and Roy McGiffen to calm the proceedings.

Montreal and Ottawa played a two-game total-goals series to determine the league championship and the O'Brien Cup.

The 1914–15 season was the first year of an agreement by the Cup's trustees, the NHA and the PCHA where the champion of each league would compete for the Stanley Cup. It marked the end of the challenge era, and began a twelve year period where the NHA/NHL champion would have to compete against a Western league for the Cup.

All three games in this series were played in Vancouver, British Columbia, with the Millionaires sweeping the best of five series in three games. 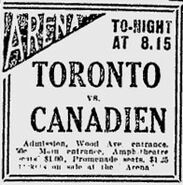 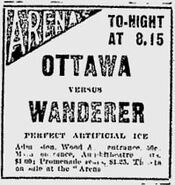 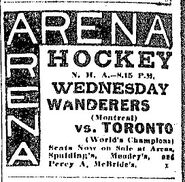 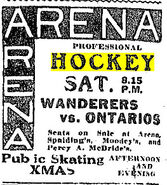 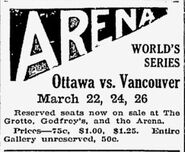