This is the 1914-15 season of the Montreal City Hockey League:

Standings at end of scheduleEdit

Montreal AAA took over the Art Ross Cup from the Montreal Victorias.

Note: The league played tripleheaders on Monday nights at the Montreal Arena. 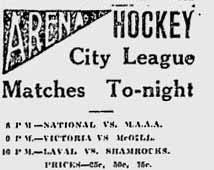 Retrieved from "https://icehockey.fandom.com/wiki/1914-15_MCHL?oldid=608640"
Community content is available under CC-BY-SA unless otherwise noted.