The Haileybury Hockey Club planned to challenge for the cup, and sent a letter to W.F. Taylor, president of the Canadian Amateur Hockey Association, indicating their intentions to do so. Their letter was referred to the Ontario Hockey Association, which was to verify the amateur standing of the club.[1] Nothing came of the challenge in the end.

This was also for the Saskatchewan senior championship.

Note: Ontario Hockey Association (OHA) maintained that some Melville players were ineligible because they broke residency rules and ordered the Victorias not to play that team. When the Toronto Victorias played Melville anyway, the OHA expelled the Victorias. 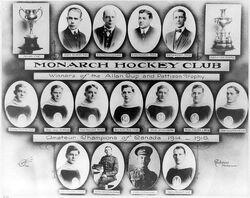 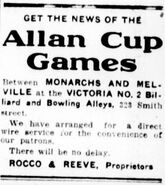 Keeping Winnipeg informed.
Add a photo to this gallery

Retrieved from "https://icehockey.fandom.com/wiki/1914-15_Allan_Cup?oldid=637870"
Community content is available under CC-BY-SA unless otherwise noted.