The 1914–15 Montreal Canadiens season was the team's sixth season and sixth of the National Hockey Association (NHA). After finishing first in 1913–14, the club posted a 6–14 record and fell to last place in the league.

Five new players joined the Canadiens in 1914-15: Albert Corbeau, Jack Fournier, Nick Bawlf, Ed Lowrey and Marcel Beliveau. Didier Pitre returns to the Canadiens from Vancouver after a cash deal with the Millionaires. Newsy Lalonde holds out in a contract dispute, prompting the team to penalize him $100 per week. After Lalonde returns in January, he plays poorly and is suspended by the team again. He only plays seven games of the season.

On January 13 in a game versus Quebec, Georges Vezina is penalized and tossed from the game for hitting Joe Hall. With the Bulldogs behind 2-1, Jack Laviolette takes over in goal, and Quebec ties the game. As was then permitted, Vezina returns in extra play, only to surrender the third Quebec goal in a game that went on record as the longest overtime to that point, taking fifty minutes and 28 seconds to settle the contest.

The team did not qualify for the playoffs. 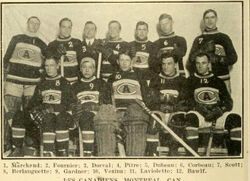