Dominion Bridge won the cup last year. This year the team was playing in the Montreal Manufacturers League. That league's season was not yet over when the Cup trustees ordered playoffs to begin. 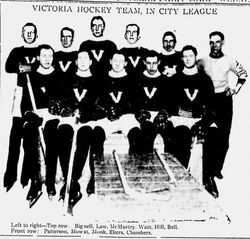 Montreal Victorias
Add a photo to this gallery

March 21 @ Montreal
Add a photo to this gallery

Retrieved from "https://icehockey.fandom.com/wiki/1913-14_Art_Ross_Cup_Finals?oldid=608403"
Community content is available under CC-BY-SA unless otherwise noted.