The 1913–14 PCHA season was the third season of the Pacific Coast Hockey Association. Season play ran from December 5, 1913 until February 24, 1914. Like the previous two seasons, teams were to play a 16 game schedule, but one game was cancelled. The Victoria Aristocrats club would be the PCHA champions. After the season the club would play, and lose, an exhibition series against the Toronto Blueshirts, NHA champions.

The Victoria Senators changed their name to the Victoria Aristocrats.

This season marked the introduction of the blue lines used in today's official ice hockey rinks. The league sub-divided the rink into three zones of 67 feet, allowing forward passing in the centre zone. This change was at the instigation of the Patrick brothers.

Tommy Dunderdale won the goal-scoring championship with 23 goals, but was nearly caught by Eddie Oatman, who scored six goals in his final game of the season against Vancouver on February 24, 1914, to finish with 22 goals.

Victoria was in last place on January 23, but then won six games in a row to claim the league championship.

A game between Vancouver and Victoria was cancelled at the end of the season. 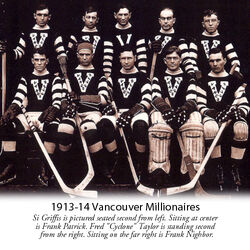 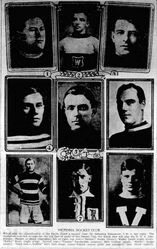 Victoria Aristocrats
Add a photo to this gallery 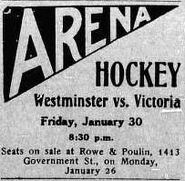 Retrieved from "https://icehockey.fandom.com/wiki/1913%E2%80%9314_PCHA_season?oldid=463603"
Community content is available under CC-BY-SA unless otherwise noted.