The 1913–14 Ottawa Senators season was the 29th season of the Ottawa Hockey Club, sixth season of the National Hockey Association (NHA). Ottawa placed fourth in the NHA, and did not qualify for the playoffs.

Ottawa put together a seven game winning streak but it was not enough as the Canadiens, Toronto and Quebec placed ahead of Ottawa. Percy LeSueur played well in a splitting of the goaltender duties with Clint Benedict, but the team did not have enough offence, scoring only 65 goals in 20 games.

The Senators did not qualify for the playoffs. 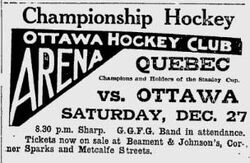 Retrieved from "https://icehockey.fandom.com/wiki/1913–14_Ottawa_Senators_season?oldid=394561"
Community content is available under CC-BY-SA unless otherwise noted.