The 1912 PCHA season was the first season of the now defunct men's professional Pacific Coast Hockey Association, which was founded on December 7, 1911. Season play ran from January 2, 1912 until March 19. Teams were to play a 16 game schedule, but one game was cancelled. The New Westminster club would be the first PCHA champions. The Royals would challenge NHA champion Quebec for the Stanley Cup, but the season ended too late to play in the east.

The season was not profitable financially. After the season, Frank Patrick, captain of Vancouver, and director of the Vancouver Arena Company was interviewed on March 6, 1912 by the Toronto Globe and expressed his hopes that next season with the new team from Seattle that results will be better.

Most of the players for the league were recruited from the east. Many players joined the PCHA from the National Hockey Association(NHA), including Tom Dunderdale, Jimmy Gardner, Pud Glass, Newsy Lalonde, Bert Lindsay, Tommy Phillips and Skinner Poulin. Frank and Lester Patrick had actively targeted the NHA for players as British Columbia had a smaller base of players.. In the previous season, the NHA has imposed maximums on player salaries and a salary cap per team that were extremely unpopular with players. Goaltender Hughie Lehman was signed from Berlin of the Ontario Professional Hockey League(OPHL).

The PCHA played seven-man rules with a rover, while the NHA experimented with six-man rules.

A game between Vancouver and New Westminster was cancelled at the end of the season. 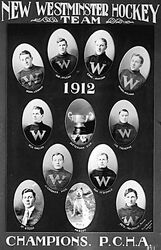 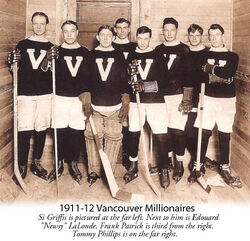 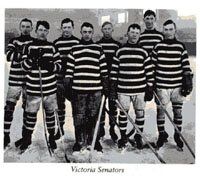 Victoria Senators
Add a photo to this gallery

Retrieved from "https://icehockey.fandom.com/wiki/1912_PCHA_season?oldid=443562"
Community content is available under CC-BY-SA unless otherwise noted.