The 1912–13 PCHA season was the second season of the Pacific Coast Hockey Association. Season play ran from December 10, 1912 until March 18, 1913. Like the previous season, teams were to play a 16 game schedule, but one game was cancelled. The Victoria Aristocrats club would be the PCHA champions. After the season the club would play, and win, an exhibition series against the Quebec Bulldogs, NHA champions.

The PCHA moved two games east of the Rockies, on March 17 in Calgary, Alberta and on March 18 in Regina, Saskatchewan. The final game of the season, between Victoria and New Westminster was cancelled. Victoria won the championship and formally challenged for the Stanley Cup, but was turned down due to the PCHA season ending several weeks later than the eastern leagues' season finished.

Tommy Dunderdale won the overall scoring championship with 24 goals in 15 games. The top one-game performance was on March 17, when Eddie Oatman scored five goals in a game against Vancouver. On January 31, Lester Patrick, a defenseman, scored four goals in one game versus New Westminster.

The PCHA tried out NHA-style six-man hockey on February 15, in a game between New Westminster and Vancouver, but reverted to seven-man play for the rest of the season.

A game between Vancouver and New Westminster was cancelled at the end of the season.

The Stanley Cup champion Quebec Bulldogs came west for an unoffical exhibition series against the Victoria Aristocrats in late March.

All the games drew capacity crowds. 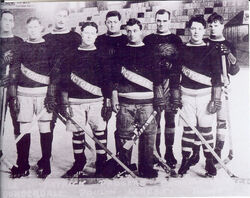 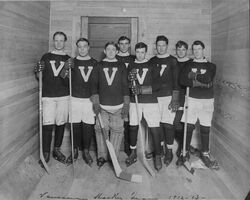 Vancouver Millionaires
Add a photo to this gallery 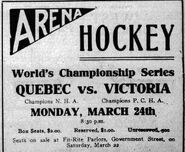 Exhibition @ Victoria
Add a photo to this gallery

Retrieved from "https://icehockey.fandom.com/wiki/1912-13_PCHA_season?oldid=407399"
Community content is available under CC-BY-SA unless otherwise noted.