This was unofficial. The Commercial League was not eligible for the provincial championship. Rowing Club refused to replay because it was going to play Victoria in a few days.

This was the first official British Columbia Senior Final and the first time that the Savage Cup was awarded. 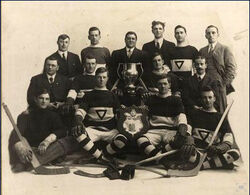 Victoria YMCA
Add a photo to this gallery

Retrieved from "https://icehockey.fandom.com/wiki/1912-13_British_Columbia_Senior_Playoffs?oldid=603701"
Community content is available under CC-BY-SA unless otherwise noted.