The 1910 NHA season was the first season of the National Hockey Association. The season started on January 5, but was suspended immediately and the league then absorbed the Ottawa and Shamrocks teams of the Canadian Hockey Association and the season continued from January 15 to March 15. Seven teams played 12 games each. The Ottawa Hockey Club played two Cup challenges during the season, but lost the Cup to their rivals the Montreal Wanderers who won the league championship and played a Cup challenge afterwards.

The league was founded on December 2, 1909 at a meeting at the Windsor Hotel in Montreal, Quebec, Canada. At this meeting four franchises were approved:

The Wanderers and Renfrew signed a pact not to merge with the CHA unless Cobalt and Haileybury were also admitted.

Two days later on December 4, the NHA held an organizing meeting at the Windsor. The CHA was meeting at the hotel also, and a message was sent to the Ottawa, Shamrocks and Nationals teams to seek a merged seven-team league. This was turned down as the teams would not accept Cobalt and Haileybury.

An executive was elected:

At the meeting, a franchise for 'Les Canadiens' was granted, to be organized by Jack Laviolette. Mr. Hare of Cobalt put up a security deposit for the franchise on the understanding that it would be transferred to Montreal French sportsmen as soon as possible.

The first Canadiens game ever took place on January 5 under a cloud. Didier Pitre had signed a contract with both the Canadiens and the Nationals. Pitre was risking a $2,000 fine and 60 days's jail time. The Nationals had a legal injunction against Pitre playing for the Canadiens. This contributed to an over-capacity crowd at the Jubilee Rink of about 5,000. Pitre did play (he was guaranteed any fines by Canadiens' management) and court action commenced. Pitre was found to not to have a binding contract with the Nationals by the courts. By this time, the CHA had folded, and no contract was enforceable. Pitre would have a long career with the Canadiens, playing into the 1920s.

On January 15, a meeting was held by the league executive and Ottawa and Montreal Shamrocks were admitted to the NHA. The games played before that date were thrown out, and games from that date forwards only counted towards the final standings.

On January 22, at a game between Renfrew and Shamrocks, Shamrock's Joe Hall was ejected for striking the judge-of-play Rod Kennedy. After regulation time, the game was tied. Referee Tom Hodge proposed that Hall return for the overtime, but Renfrew objected and did not play the overtime. Hall was later fined $100 for the incident and suspended until January 30. The game was ordered replayed but wasn't replayed due to ice conditions and the game results were accepted as a tie.

On Cyclone Taylor's first return to Ottawa as a member of the Renfrew team, he made his famous promise to score a goal backwards against Ottawa. This led to incredible interest, with over 7000 in attendance. A bet of $100 was placed at the King Edward Hotel against him scoring at all. The Senators would win 8–5 (3 goals in overtime) and more importantly keep Taylor off the scoresheet. Later in the season at the return match in Renfrew, Taylor supposedly made good on his boast with a goal scored backwards (Taylor himself denied it). This was the final game of the season, and the Senators had no chance at the league title, and don't appear to have put in an effort, losing 17–2.

‡ The January 22 game was abandoned due to an on-ice incident. It was ordered replayed on March 2 in Ottawa, but wasn't played due to soft ice in Ottawa.

The Wanderers as champions of the league, took over the Stanley Cup from Ottawa, and were awarded the O'Brien Cup as league champions.

Edmonton was champion of the Alberta Amateur Hockey Association.

Since Ottawa won the challenges, the winner of the regular season of the NHA would take over the Stanley Cup championship. The Wanderers having won the championship of the NHA, took possession of the Cup from Ottawa. They had a challenge from Berlin, Ontario, champions of the Ontario Professional Hockey League and easily defeated them. For 1910, there would be two Stanley Cup holders, Ottawa until March, and Montreal for the rest of the year.

After the season, the NHA arranged an 'international championship' at New York's St. Nicholas Rink. Like the previous spring, Ottawa and Wanderers played a two-game series in New York for a purse of $1,500. Wanderers won both games 4–3. Renfrew next travelled to New York and defeated the Wanderers in a single game for $1,000.

†known non-playing members of 1910 Ottawa Hockey Club. No team picture of Ottawa in 1910 has been found.

Ottawa HC engraved their name as just "Ottawa 1910" They included both challenge series win as OTTAWA vs GALT/OTTAWA vs EDMONTON. 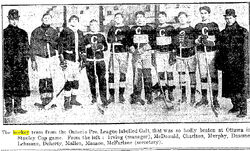 Galt
Add a photo to this gallery

Montreal Arena
Add a photo to this gallery

Retrieved from "https://icehockey.fandom.com/wiki/1910_NHA_season?oldid=663730"
Community content is available under CC-BY-SA unless otherwise noted.