The 1910–11 NHA season was the second season of the now defunct National Hockey Association. Five teams played 16 games each, starting on December 31, 1910 and ending on March 10, 1911. The Ottawa Hockey Club won the league championship and took over the Stanley Cup from the Montreal Wanderers.

The annual meeting was held November 12, 1910 electing the following executive:

The Shamrocks resigned from the league and were not replaced. The Club Athletique-Canadien and the Quebec Hockey Club were granted franchises. Haileybury and Cobalt left the league. Club-Athletique-Canadien had made a claim on the Canadiens name and threatened a lawsuit if they were not granted a franchise. There are three written descriptions of this transaction. Coleman(1966) writes that George Kennedy, president of the CAC bought the Haileybury franchise. In Andy O'Brien's book, Ambrose O'Brien is quoted as saying that he sold the Canadiens to Kennedy. In Holzman's book, the franchise was given to Kennedy, but Kennedy had to pay O'Brien for the rights to Newsy Lalonde. In The Globe of March 7, 1911, it is claimed that Lalonde's sale was the first ever sale of a player.

A second meeting, on November 26, 1910 updated the Board of Directors to:

The salary cap, while opposed by the players was upheld at the meeting.

The salary cap of $5000 per club caused a situation where Bruce Stuart of Ottawa threatened a mass defection to a new league. However, the players found that the Arena Company, owners of the Montreal Arena would not rent to the players. There was no other suitable arena in Montreal available for a new league and the players had no choice but to abandon the effort. Some players took a large cut in salary: Marty Walsh, Fred Lake and Dubby Kerr were paid $600 each where they had been paid $1200 each in 1910. The dispute caused the cancellation of a pre-season exhibition series in New York for the Ottawas and Wanderers.

Games were changed from two periods of 30 minutes, to three periods of twenty minutes, with ten minute rest periods. The Spalding hockey puck was adopted as the standard puck.

The Ottawa Senators then played two challenges against Galt and Port Arthur at The Arena in Ottawa.

† Missing from the team picture. The only team picture found of the Ottawa Hockey Club in 1911 includes 9 of the 10 players, and no non-playing members. 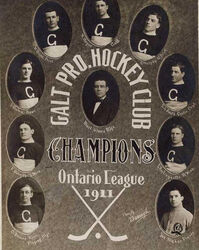 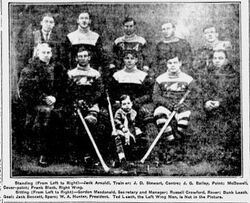