This was formed by the Winnipeg Winnipegs and Winnipeg Victorias with a new team - Winnipeg Shamrocks. They withdrew from the Manitoba League because of the professionalism of the other teams.

The league did not draw very well. The Shamrocks did very poorly on the ice and they were thrown out of the league on Feb. 20. 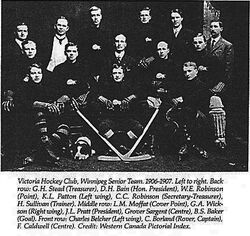 Retrieved from "https://icehockey.fandom.com/wiki/1906-07_Manitoba_Senior_Playoffs?oldid=407566"
Community content is available under CC-BY-SA unless otherwise noted.