The 1904 Canadian Amateur Hockey League (CAHL) season lasted from January 2 until February 24. Teams played an eight game schedule. This was a tumultuous year as Ottawa resigned in February and defaulted four games.

Also, prior to the start of the season a rival hockey league, the Federal Amateur Hockey League was started, with the Montreal Wanderers taking most of the 'Little Men of Iron' from the Montreal Hockey Club.

As the Wanderers had signed players from Montreal, it was forbidden for teams to play games against FAHL teams, and for team officials to participate in FAHL activities.

The season started out with Ottawa winning their first four games. However, in their third game against the Victorias, the Ottawa team arrived 1 1/2 hours late. The game was called at midnight, with Ottawa ahead 4–1. After a game where the Shamrocks arrived late in Ottawa, the League levied fines against the Shamrocks and Ottawa, and ordered the Ottawa-Victorias game to be replayed. Despite a threat from Mr. Dickson of Ottawa that Ottawa would resign if the game was to be replayed, the League continued to demand that the game be played. The Ottawa club offered to play it if it had a bearing on the league championship, but this was not acceptable to the league. In the end, Ottawa resigned from the league and the league considered the final four games to be forfeits.

This overshadowed a great season from Quebec, which won the season with a record of 7–1 (2 wins by forfeit) and tried to claim that the Cup belonged to the CAHL season winner. The Cup trustees decided that the Cup went with Ottawa.

† Ordered to be replayed but never replayed as Ottawa resigned from league.

Ottawa would leave the CAHL in mid-season, leaving Quebec to win the league. The CAHL league officials demanded that the Stanley Cup should stay with the CAHL, but the trustees ruled that it went with the Ottawas. Quebec would not challenge Ottawa.

Before Ottawa resigned from the CAHL, Ottawa defended the Cup against the Winnipeg Rowing Club in a best two-of-three series played in Ottawa 9–1,2–6,2–0 (2–1).

Next, Ottawa would defeat the Ontario Hockey Association champion Toronto Marlboros in a two-game total-goals series, played in Ottawa, 6–3,11–2 (17–5).

To finish the season, Ottawa played a series with Brandon Wheat Cities, champions of the Manitoba & Northwestern Hockey Association. Ottawa would win the two-game series 6–3, 9–3 (15–6), held in Ottawa on March 9–11. 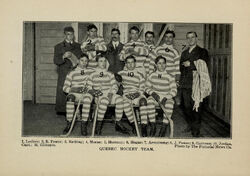 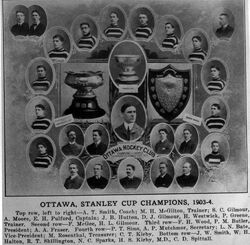 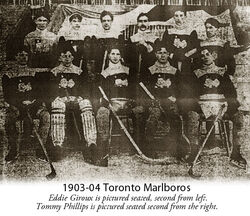 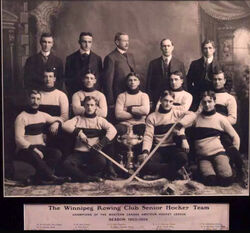 Winnipeg Rowing Club
Add a photo to this gallery

Retrieved from "https://icehockey.fandom.com/wiki/1904_CAHL_season?oldid=663726"
Community content is available under CC-BY-SA unless otherwise noted.