This is the 1904-05 season of the Ontario Hockey Association's Senior series:

Brockville dropped out & defaulted a game in Kingston and a game at home to Smiths Falls.

The second game was called at half-time with Smiths Falls leading 6-4.

From the OHA Annual Report:

There were some unpleasant features connected with the final matches. Home and home games were first arranged by the Executive and the first game was played in Toronto, the Marlboros winning by 8 to 3. In the return game at Smith's Falls there was considerable rough play and at half-time the Marlboros claimed that only two of their men were able to continue, the remainder being incapacitated by reason of injuries received during the match. Smith's Falls contended that as five Marlboro players were playing at half time, they should be compelled to put, at least, four men on the ice. The upshot of it all was that the game did not proceed further, the referee, under the very unusual circumstances not giving a decision, but leaving the matter entirely in the hands of the Executive. The Executive decided to cancel both games, and ordered the teams to play a single match on neutral ice at Peterborough to decide the championship. The game was played and Marlboros were victorious by a score of 9 to 3. 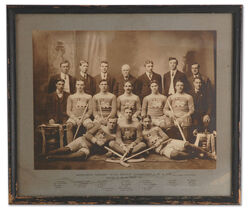 Toronto Marlboros
Add a photo to this gallery

Retrieved from "https://icehockey.fandom.com/wiki/1904-05_OHA_Senior_Season?oldid=447396"
Community content is available under CC-BY-SA unless otherwise noted.