This season saw the loss of several players to the new International Hockey League in the U.S., including Charles Liffiton, Hod Stuart, Eddie Hogan.

The season would be a two team race between Montreal Victorias and Ottawa, splitting their matches between each other. The season ended in a tie, which necessitated a playoff, won by Ottawa to win their first Stanley Cup. At the other end of the standing, Shamrocks did not win any games.

† Postponed and not played.

Another Montreal HC vs. Winnipeg Victorias best-of-three challenge series was held in early 1903. In game one, defending champion Montreal defeated Winnipeg, 8–1. game two was the first Stanley Cup challenge match to be replayed. Both teams skated to a 2–2 tie before the game had to be suspended at 27:00 of overtime because of a midnight curfew. It was then decided to discard the result and replay game two two days later. In the rescheduled contest, the Victorias won, 4–2, to even the series. However, Montreal won the decisive game three, 4–1, to retain the Cup.

As the new CAHL and Cup champions, the Ottawas accepted a challenge from the Rat Portage Thistles of the Manitoba & Northwestern Hockey Association (MNWHA). Entering the best-of-three challenge series, the Thistles were younger and quicker than Ottawa; only one player on the Thistles was over the age of 20. However, poor soft ice conditions in Ottawa played a major factor as Ottawa swept the series with scores of 6–2 and 4–2.

For their win, the Ottawa players would each receive a silver nugget. From that point on the team would also be known as the Silver Seven. 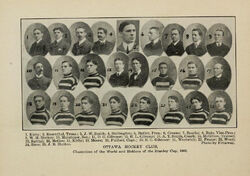 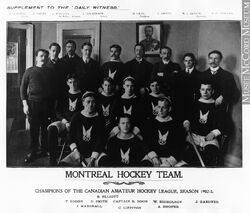