This is the 1902-03 season of the Ontario Hockey Association's Intermediate series:

But Kingston Ramblers won on protest.

Note: Originally all three teams had been in Group 12. Galt lost 5-2 to Paris and beat Brantford 4-1.

A smallpox epidemic in Galt then isolated the hockey team. Galt was placed in Section B on its own and entered the provincial playoffs when the quarantine ws lifted. 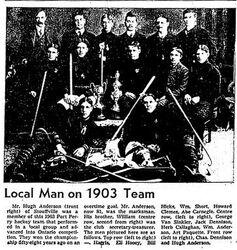 Port Perry
Add a photo to this gallery

Retrieved from "https://icehockey.fandom.com/wiki/1902-03_OHA_Intermediate_Groups?oldid=460641"
Community content is available under CC-BY-SA unless otherwise noted.