This is the 1901-02 season of the Ontario Hockey Association's Junior series:

Note: The original score of the second game was 3-3. However, one of the Queen's goals was scored with only half a puck. The puck had split on the shot and only half went into the net. It was ruled no goal by the OHA.

Parkdale was disqualified. Hamilton dropped out.

The Toronto Simcoes dropped out before the season, leaving just two teams. 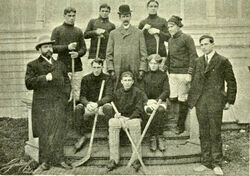 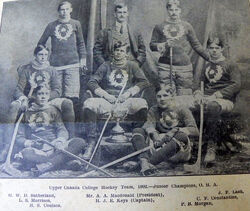 Upper Canada College
Add a photo to this gallery

Retrieved from "https://icehockey.fandom.com/wiki/1901-02_OHA_Junior_Season?oldid=454780"
Community content is available under CC-BY-SA unless otherwise noted.