The 1900 Canadian Amateur Hockey League (CAHL) season lasted from January 6 until March 10. Teams played an eight game schedule. Again, the Montreal Shamrocks were the league champion with a record of seven wins and one loss.

McGill University applied to join the league but was turned down.

The use of netting for the goal was demonstrated with a model produced by Frank Stocking, goalkeeper of the Quebec club at the annual meeting. After an exhibition game between the Shamrocks and Victorias, the use of goal nets was approved for league play, and used for the season. The netting connected the two upright posts, but there was no crossbar across the top.

The Shamrocks won the championship losing only one game, and that, after the league championship was decided. This was the second year in a row for the Shamrocks, who were a mediocre team before this stretch of success and would return to it the next year.

The MHA's Winnipeg Victorias issued another challenge for the Cup. This time, a best-of-three series was played against the defending champion Montreal Shamrocks. Winnipeg won the first game, 4–3, but Montreal prevailed in the next two games, 3–2 and 5–4.

In March, the Shamrocks then received another challenge for the Cup. However, the Halifax Crescents of the Maritime Hockey League (MaHL) did not pose much of a threat as Montreal crushed them, 10–2 and 11–0.

^ Unknown who played Center, Right wing and Left wing, so the players are listed as forwards. 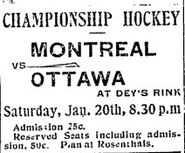