The inaugural 1899 Canadian Amateur Hockey League (CAHL) season lasted from January 7 until March 4. Teams played an eight game schedule The Montreal Shamrocks were the league champion with a record of seven wins and one loss.

On January 4, when Shamrocks defeated Quebec at Montreal by a score of 13–4, Harry Trihey scored 10 goals.

The January 26 game between Montreal and Quebec was protested because it was alleged that the referee, Fred Chittick, Ottawa's goalkeeper, was drunk. The game was rescheduled for February 14, to be played in Ottawa, but in the end, Quebec declined to play the game.

Victorias defeated Ottawa at Montreal on February 11, by a score of 16–0. Fred Chittick attempted to score by himself, rushing the length of the ice from his net, without success.

The race for the championship was decided on March 1st when Shamrocks defeated the Victorias 1–0. Eight thousand people are recorded as being in attendance, thousands of dollars was wagered and Harry Trihey of Shamrocks scored the deciding goal.

After losing their first six matches, Quebec withdrew from the rest of the schedule, forfeiting their last two games.

† Montreal refused to continue with 12 minutes to play. Game was to be replayed on February 14th, but Quebec declined and the game was defaulted.

Montreal received another challenge from the MHA's Winnipeg Victorias who had won the 1898-99 Manitoba Senior Playoffs. This time, it was decided that they would play a two-game total goals series in February 1899.

The first game was won by Montreal 2–1. Winnipeg's captain Dan Bain injured his eye and did not play in the second game due to hemorrhaging behind the eye.

The second game ended in controversy. With Montreal leading the game 3–2 with about 12 minutes left in the game, Montreal's Bob Macdougall violently slashed Winnipeg's Tony Gingras. As Gingras was carried off the ice, referee Bill Findlay only called Macdougall for a two minute minor. Angry that he should have been accessed a larger penalty, Winnipeg went into their dressing room in protest. Insulted, Findlay abruptly went home, but returned after officials followed him on a sleigh and persuaded him to return. Once back at the rink, the referee gave Winnipeg 15 minutes to return to the ice themselves. They refused and thus Findlay disqualified the team and declared Montreal the winners. 4,000 were attending the Winnipeg Auditorium rink to hear returns of the game by telegraph.

The Stanley Cup passed from the Montreal Victorias to the Montreal Shamrocks as champions of the league March 4, 1899.

The Shamrocks defended the trophy against Queens University, who had won the 1898-99 OHA Senior Season. The game was played half under Ontario rules and half under CAHL rules.

† only the trainers were included on the team picture, these are the other official non-players with Montreal Shamrocks in 1899. 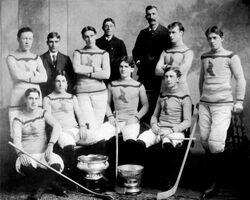 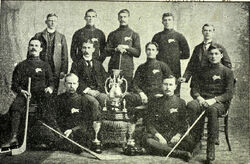 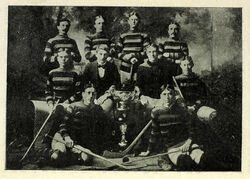