The 1897 Amateur Hockey Association of Canada season lasted from January 9 until March 6. Each team played 8 games, and Montreal Victorias were again first with a 7–1 record, retaining the Stanley Cup. The club won the Stanley Cup back from the Winnipeg Victorias prior to the season. This was their third-straight league championship.

At the annual meeting on December 12, 1896, the secretary reported that the association had lost all of its records in a fire, except for its minutes.

Clare McKerrow of Montreal HC set a new record with six goals in the opening game against Quebec on January 9.

† Protested by Ottawa who scored the tying goal in last few seconds but the goal was disallowed by the referee. The protest was upheld and the game replayed.

Victorias vs. Winnipeg at WinnipegEdit

Prior to the season, Victorias would defeat the Winnipeg Victorias of the (Manitoba Hockey Association) 6–5, on December 30, 1896, to reclaim the Cup they had lost in the previous season to Winnipeg.

Members of Montreal Victorias who won the Stanley Cup on December 30, 1896Edit 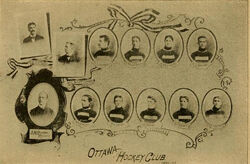 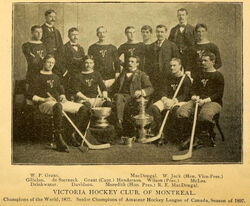 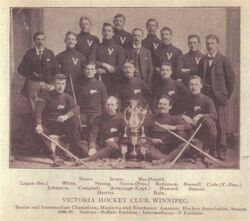 Retrieved from "https://icehockey.fandom.com/wiki/1897_AHAC_season?oldid=663017"
Community content is available under CC-BY-SA unless otherwise noted.