The 1896 Amateur Hockey Association of Canada season lasted from January 3 until March 7. Each team played 8 games, and Montreal Victorias were first with a 7–1 record. During the season, on February 14th the Victorias hosted a Stanley Cup challenge match with the Winnipeg Victorias club. Winnipeg won 2–0 to win the Cup.

The Crystals were allowed to change their name to Shamrocks, which matched their new affiliation with the Shamrock A.A.A.

The Victorias were truly the class of the league and only lost once, 3–2 to Ottawa. Their regular season team goal total was nearly double that of Ottawa.

There were no playoffs as Montreal won first place exclusively.

After the season, Montreal and Shamrocks played exhibition games in the United States:

Victorias vs. Winnipeg at MontrealEdit

The first successful challenge to the Cup came in February 1896 by the Winnipeg Victorias, the champions of the Manitoba Hockey Association (MHA). On February 14, Winnipeg beat defending champion Montreal Victorias, 2–0, becoming the first team outside the AHAC to win the Cup.

According to The Globe, in its report on the game:

The westerners started in with a rush and scored the two games; one in ten minutes and one in nine minutes before the Vics seemed to waken up. For the rest of the first half, the honors were even. In the second half, the Winnipeggers were strictly on the defensive. Shot after shot was fired on their goal but the Vics could not score due to the superb work of Merritt, the visitor's goalkeeper. The match ended 2 to 0 in favour of the visitors. Both sides were dissatisfied with the work of Mr. Alexis Martin of Toronto as referee; claiming he was utterly ignorant of the rules, an opinion which seemed to be shared by the spectators. 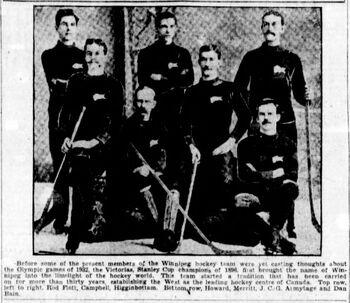 Retrieved from "https://icehockey.fandom.com/wiki/1896_AHAC_season?oldid=663021"
Community content is available under CC-BY-SA unless otherwise noted.