This was the 1890-91 season of the Ontario Hockey Association's senior level:

It was the first season of this league.

2 - Ottawa Rebels defaulted out of a planned 3 team Ottawa round robin.

Toronto Granites objected to the use of the Victoria Rink for this game. 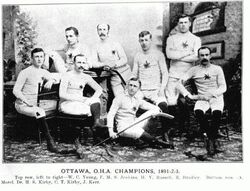 Semi Final @ Kingston
Add a photo to this gallery

Retrieved from "https://icehockey.fandom.com/wiki/1890-91_OHA_Senior_Season?oldid=404114"
Community content is available under CC-BY-SA unless otherwise noted.