Frank "Big M" Mahovlich scored twice and assisted once, each time giving Toronto a one-goal lead, but, each time, the All-Stars responded to even the score. Mahovlich was named MVP of the game.

Gordie Howe became the all-time All-Star game points leader when he assisted on Henri Richard's goal in the first period. His ten points put him one up on Maurice Richard. 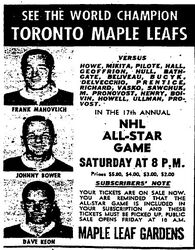 First two periods of the 1963 All-Star game with commercials and intermission features.