Maurice “Rocket” Richard scored the first and last goals and brother Henri Richard scored the winning goal and added two assists to lead the Stanley Cup champion Montreal Canadiens to a 6-3 victory over the all-stars. Andy Bathgate of the New York Rangers scored twice for the All-Stars. During the game, the Canadiens' Bernie "Boom Boom" Geoffrion had to be helped off the ice after receiving a crushing body-check from Red Kelly of the Detroit Red Wings. Geoffrion suffered pulled chest and neck muscles, but was back in the line-up for the Canadiens' home opener a few days later. 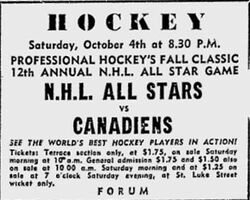 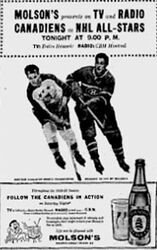 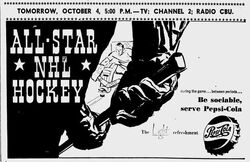 Vancouver Television Ad
Add a photo to this gallery
Retrieved from "https://icehockey.fandom.com/wiki/12th_National_Hockey_League_All-Star_Game?oldid=673460"
Community content is available under CC-BY-SA unless otherwise noted.